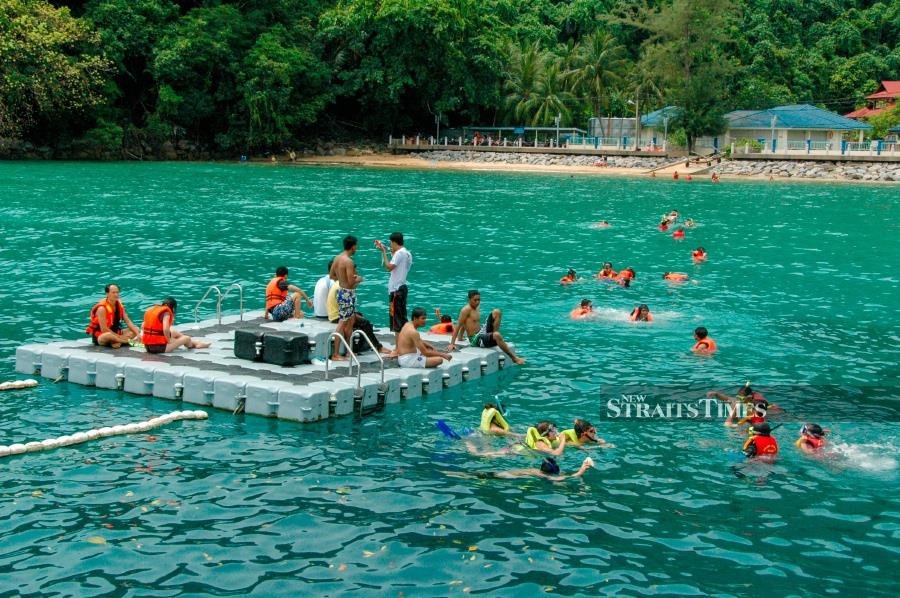 TIOMAN got its first shot to fame when it was chosen as the shooting location for a 1958 Holllywood movie titled South Pacific. In the musical movie, Tioman was to represent "Bali Hai", thanks to its beautiful white beaches and clear azure waters. Thanks to the movie, Tioman, the largest of an archipelago of nine islands, was hailed as one the world's most beautiful islands. And it still is. To safeguard its marine and ecological wonders, the archipelago and the surrounding which is located 56km off the coast of Pahang was gazetted as a Marine Park in 1994. Tioman has eight main villages dotted along its 69km coastline of sandy beaches and rugged rocky cliffs whose peaks are dominated by exposed granite boulders, with the most impressive are Batu Sirau (747m) and Nenek Si Mukut (685m). For first time visitors who unsure of where to go for their island holidays, here are Tioman's top five must-know villages and what to expect there.

Tekek is more like a small town and the administrative centre for the island. The island's police station, health clinic, other government offices and the one and only ATM machine are located here. There are also a handful of duty free shops thanks to Tioman's status a duty free island but there are only cigarette, alcohol and chocolates on sale. One of Tekek's real attractions is Tioman Marine Park Centre, located at Tanjung Mesoh. The centre puts up an exhibition and informative displays on the marine life in Tioman. But its star attraction is the marine life thriving underwater off its coast. A typical Tioman holiday package usually includes a visit to the centre, offering snorkeling activity.

Located at the northwest tip of the island, Salang is perhaps one of the popular villages of Tioman. When the sun goes down, Salang comes alive and colourful, thanks to the seaside eateries and cafes. Salang also has one of Tioman's most beautiful beaches that is ideal for snorkeling or simply sun bathing, while the small island of Soyak which is a popular dive site is just a stone throw's away from the beach. The more adventurous can even try hiking to the adjacent and more secluded Monkey Bay for the rewarding scenery of a gently sweeping deserted beach.

On the west coast, Genting is a rustic mix of picturesque island village and charming small resorts. Genting makes a good choice for those looking for a laid-back, kampong atmosphere. At a glance, the village looks dense and cramped as it is being sandwiched by a lush green hill and the beach. But its vibrant and upbeat kampong setting will in no time sets into visitors' holiday mood. But on a busy weekend, do expect its main jetty to be abuzz with activities and business at its souvenir shops, mini markets and sea side eateries.

Juara is unique for being the only village sits facing the wide open waters of the South China Sea. If compared to Tekek or Genting, Juara is far more quieter and relaxed, which is perhaps the reason why it is also home to a turtle sanctuary. Most visitors to Juara usually start their journey by taking offroad taxies from Tekek, while the more fit and adventerous hike on the 6km jungle trail that takes them through the pristine rainforest interior of Tioman.

The southernmost part of Tioman is home to Mukut. Although the rickety old wooden jetties have given way to sturdy concrete ones, not much else has changed in the village. This only means that Mukut still has that a rural island charm which is hard to beat. Its small cluster of simple chalets and houses are framed against the island's twin peaks – Gunung Nenek Semukut and Batu Sirau. Most of the available lodging are simple and basic while the main attraction here is jungle trekking since the village is the starting point for treks to scale the twin peaks. The multi-tiered and spectacular Asah waterfall which was once a source of fresh water for ancient mariners is also a 45 minute trek away.