KUANTAN: The state government has submitted a proposal to alleviate the traffic congestion in Cameron Highlands to the federal government. Its Tourism, Environment and Plantations Committee chairman, Datuk Seri Mohd Sharkar Shamsudin said the proposal among others included opening alternative road and implementation of one-way routes. He said the matter, however, would be decided at the federal level as Cameron Highlands, was an income generator in tourism industry, which was one of the sectors contributing to country’s revenue.

“I can’t say for certain when it (proposal) would be implemented as it needed an allocation from the federal (government) as it also benefited from the revenue (generated by Cameron Highlands).“We suggested measures to ease the congestion thereby creating an alternative route or implementing one-way road (system),” he told a Press conference after launching the state’s tourism product exhibition here today. Mohd Sharkar said tourism industry was the third largest contributor to the country’s income and needed to be further strengthened though clearer vision and directions.

He said cooperation with industry key players like hotels, tourism products should be enhanced particularly in ensuring the products remain relevant and tourist choice of destination, both the domestic and foreign visitors. “I believe that with the right strategy, it is not impossible for tourism to be the number one industry in the country,” he said.

On a separate matter, Mohd Sharkar, who is also an Umno supreme council member, dismissed allegation by Parti Pribumi Bersatu Malaysia (PPBM) supreme council member Datuk A. Kadir Jasin that 40 Umno members of parliament jumping ship as mere psychology war. He said the statement made by the prominent figure in journalism was a proof that the party led by Prime Minister Tun Dr Mahathir Mohamad was in trouble and unstable.

“Why would (he) say that (Umno MPs jumping ship)?; (it was) as if they (PPBM) are facing problems. “We (Umno) had never harassed and asked others to join our party...it showed that we didn’t have such problems,” he said. 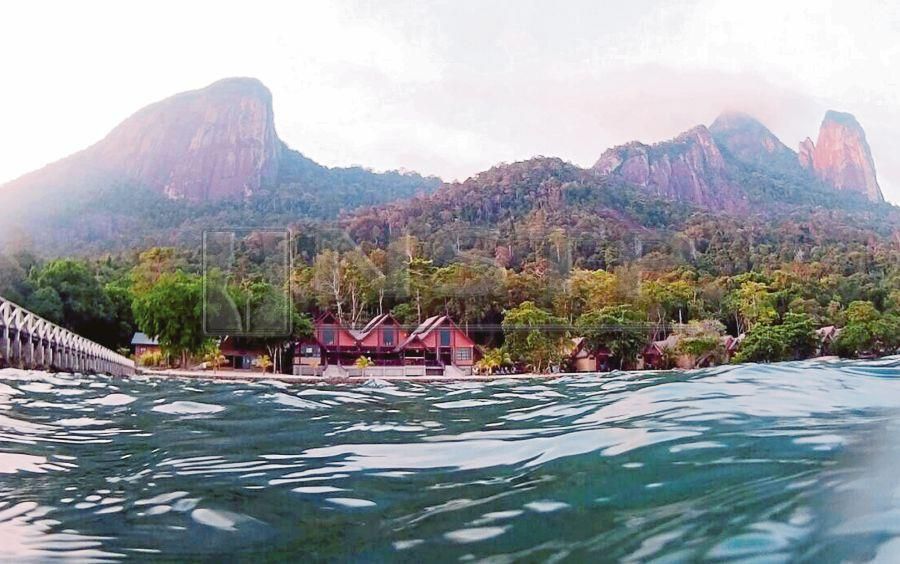 THE residents of Pulau Tioman, off Rompin, Pahang, staged a protest against the construction of a new airport on the island, at Kampung Genting on Oct 21.The village head claimed that the new airport would be built on reclaimed land near Kampung Genting.“I urge the government to reconsider this plan. We, the people of Tioman, do not feel that this new project will benefit us,” he said, adding that the villagers were in the dark about the project.

“Why is there no transparency in communicating information about this airport to us? The authorities have not sought our feedback.”Pulau Tioman has an airport in the main village, Kampung Tekek, but it has a short landing strip, allowing only smaller planes to land. Many of the villagers feel that it would be better to upgrade the current airport and use suitable airplanes to operate flights into the island.They suggested allowing more flights into the island from other airports (besides Subang Airport) such as from Kuantan, Senai and Singapore.They also suggested improving ferry services in Mersing and Tanjung Gemok jetty.

Pulau Tioman is a well-known tourist destination. Tourist arrivals have been steadily increasing since 2008.However, the island does not have adequate infrastructure and facilities to support the growing number of tourists. It would not be able to cope with the influx of tourists that the construction of a new airport would bring.

A new airport is not what the island needs. It will not benefit the local community or the environment.I have been living on the island for the past five years. The focus should be on improving and upgrading infrastructure, as well as the drainage system, rubbish disposal method, waste treatment and electricity supply.

Pulau Tioman is hit by frequent water shortages in addition to problems due to improper wastewater treatment facilities. The incinerator on the island is not able to accommodate the large amount of trash generated or process certain waste such as electrical and electronic waste.

The building of a new airport not only removes the focus of what really needs fixing on the island, but it also leaves a negative impact on the local community and environment.

The main attraction of the island is its beautiful coral reefs, which will face irreversible damage if the construction is carried out. It can also cause a change in currents and sand movements, which may lead to beach erosion.

The locals are concerned that this new airport may turn Pulau Tioman into another Boracay Island (the Philippines) or Maya Bay (Thailand), which had to be closed due to severe environmental damage brought about by uncontrolled tourism expansion.

While the locals do not oppose development on the island, they feel that this airport project would impact Pulau Tioman negatively. More research and an environmental assessment of the island must be done before such projects are approved.

The needs and views of the locals should be considered.

Pulau Tioman is a marine protected area and it should remain pristine and protected.

KUALA LUMPUR: Chronic traffic jams at Cameron Highlands, especially during the holiday period sees the need for restricted vehicle access to the tourist spot. Tanah Rata state assemblyman, Chiong Yoke Kong said the four-day holiday period had resulted in a chronic traffic jam in the hill station. He said tourists flocking the hill station by vehicles have seen traffic coming to a standstill from Ringlet to the Blue Valley. A short distance of one to three kilometres would require three to four hours to reach the respective destinations, he added.

He said three additional main roads connecting Cameron Highlands had been built over the last 20 years. These are namely the Jalan Ringlet-Sungai Koyan which connects Raub, Ringlet and Sungai Koyan; Jalan Simpang Pulai-Cameron Highlands and Jalan Gua Musang-Cameron Highlands. “These roads had made it very convenient for tourists to come to Cameron Highlands from the West Coast, East Coast and Pahang, hence the substantial increase of a number of tourists throughout the 20 years which is evident by the statistics in 2017 that has recorded 750,000 tourists in 2017.

“Based on traffic reports by many traffic apps, an average of more than ten thousand cars coming to Cameron Highlands is recorded every day during long holidays,” said the Dapsy national political education director in a statement. He added that despite four roads connecting the hill station, only one main road was available inside Cameron Highlands area.

In addition, he said the district does not have enough parking lots and thus is unable to accommodate 10,000 cars, he said. “The unplanned and disorganised development by the local and state government has created several traffic bottlenecks in Cameron Highlands,” said Chiong. He said local authorities had been lax in enforcing the law against vendors and tourists who park illegally.

Chiong proposed the Cameron Highlands District Council to utilise the entrances at Blue Valley and Ringlet, and can cooperate with the Perak state government to build parking lots at Tapah and Simpang Pulai which are at foothills. This is in order to implement vehicle restrictions and provide feeder services such as small buses that bring tourists to Cameron Highlands.

He said restricting entry of vehicles into tourist attractions is a common traffic control measure in many countries. Chiod said for example in China, traffic categories had been classified and there are feeder services to lead tourists’ vehicles to their connected parking spots.

KUANTAN: Low-cost carrier AirAsia will resume its direct flights from Kuala Lumpur to Kuantan starting next month after a seven-year hiatus.

A Malaysia Airports Holdings Bhd source said AirAsia’s return to service the route brings an end to the long wait for an alternative option for travellers as currently Malaysia Airlines (MAS) is the sole airline servicing the route.

“AirAsia will be flying to Kuantan daily in the morning and there are plans to introduce a second flight to serve the same route in the evening hours between 6pm and 8pm(klia2-Kuantan-klia2). However, there has yet to be confirmation on the evening flights but it could be just a matter of time.

“AirAsia has decided to resume the route with daily flights in and out of Kuantan from Sultan Haji Ahmad Shah Airport and providing the evening flights will certainly offer more travel options for people,” said the source.

The source confirmed that AirAsia will setup a ticketing information booth at the Sultan Haji Ahmad Shah Airport here early next month and an official welcome event will be held when the inaugural flight arrives at the airport here on Oct 28.

“Tour operators can take advantage of the cheap flight tickets to offer more tour and leisure packages at a low price. It is certainly going to create more excitement in the state capital,” he said.

AirAsia first opened up the route from the then low-cost carrier terminal (LCCT) to Kuantan in June 2008 until 2011 and later Firefly, and Malindo Airlines also joined in to service the route.

However, currently only MAS and Firefly serve the Kuala Lumpur-Kuantan route while Scoot, a Singaporean low-cost airline owned by Singapore Airlines, is servicing the Singapore-Kuantan route, and vice-versa.

Once described as less profitable route, things have changed over the years here especially with the presence of the Malaysia-China Kuantan Industrial Park, new holiday resorts and tourist attractions which is now expected to create a positive impact to the state.

Last month, AirAsia chief executive officer Riad Asmat was reported saying that the low-cost airline will start flights to Kuantan on Oct 28 and it will mark AirAsia’s presence in all the main airports in the country.

JERANTUT: Eco-tourism industry players have been encouraged to implement the “Vision Zero” concept in a move to help reduce the number of accidents among its workers and tourists. National Institute of Occupational Safety and Health (NIOSH) Chairman Tan Sri Lee Lam Thye said: “Vision Zero” focuses on finding solutions that can help prevent accidents and deaths from occurring at the workplace.

“Those involved in the eco-tourism sector are also exposed to various danger. Jobs such as boat operators, mountain and tour guides has its risks so we want them to always be on their toes and never take things for granted especially concerning safety. “Achieving zero accident is everyone’s dream but this vision is more focused on preventing accidents from occurring. We want to ensure everyone is aware on ways they could avoid a mishap from happening just like the saying “prevention is better than cure,” he said after opening a dialogue on Occupational Safety and Health (OSH) in the Tourism Sector at Mutiara Taman Negara Eco Park Resort here, today.

“If those involved in the tourism sector are willing to change for the better, I believe that the sector can be among the first to implement the Vision Zero initiative,” he said. He said incidents that resulted from injuries or deaths in the tourism sector could tarnish the country’s image and affect those involved in the industry.“For example, incidents such as drowning in recreational areas, a mishap resulted by a capsized boat or tour bus plunging into a ravine will only create fear among tourists,” he said. He urged the relevant agencies to improve the law enforcement aspects to help safeguard the welfare of tourism workers and tourists.